Infiltration of carbon nanotube (CNT) wire with copper or aluminum can reduce the weight of wires and cables.

Both carbon nanotube-based wire and boron nitride non-woven matt when used as a dielectric in coaxial cables can contribute to dramatically reducing the weight of electrical conductors. Lower energy usage has become a strong driving force for light-weighting cables and for other replacements for copper where any acceleration of the conductor is important. Examples include improved operating range and time on station capabilities for aircraft, ability to carry larger payload, reduced CO2 emission for aircraft and reduced in-theater logistics for fuel management, as well as economic saving from greater fuel efficiency. Another important area is large traction motors where rotating heavy copper armatures contributes to losses as motors or generators start and stop. 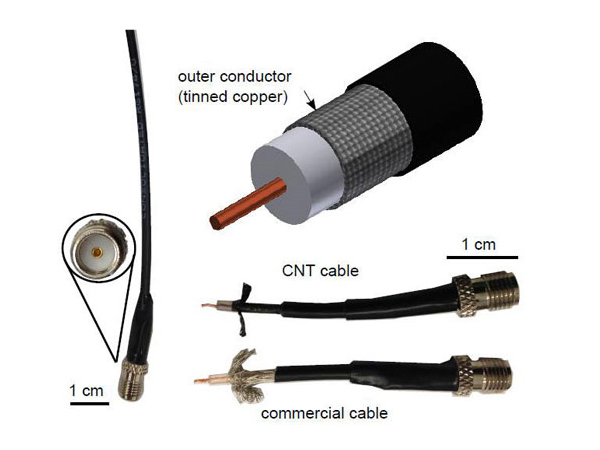 Marine environments and High Temperatures Applications:
CNT fibers, have been reported to be structurally resistive to most strong acids both oxidizing and reducing acids even those containing halogens, which makes them perfect candidates for applications where metals fail due to corrosion. This is an important issue for aging aircraft and for Navy aircraft. Carbon nanotubes are also stable at temperatures around 400 C or higher. At these temperatures copper is highly subject creep and too very weak for most uses. An example might be an alternator or generator in contact with hot jet engine components or components operated near the ocean.